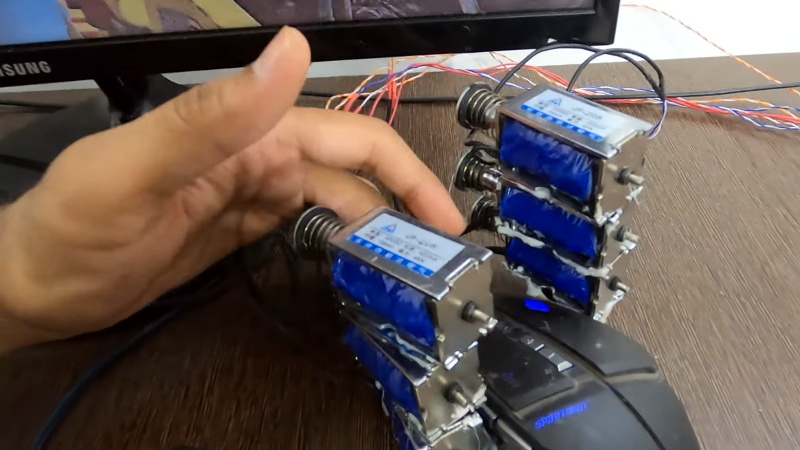 This is a really amazing time for those who like to invest their downtime checking out virtual worlds. The graphics in some big-budget titles are easily approaching photorealism, and immersive multi-channel sound can actually make you believe you’ve been transferred to another location or time. With another generation or more of GPU advancement and VR hardware, the line between gaming and reality is bound to get awful blurry.

That said, we’re still a far way off from the holodeck aboard the Business. A high-end PC and the most recent in VR can deceive your eyes and ears, but that still leaves your other senses out of the fun. That’s why [Jatin Patel] has developed this clever force-feedback mouse using a variety of solenoids.

The concept is quite simple: a Python program on the computer listens for mouse click events, and informs an attached Arduino to fire off the solenoids when the player pulls the virtual trigger. It’s naturally not a perfect system, as it would seem that clicking in the video game’s menus would also start your “weapon” firing. However as you can see in the video after the break, when it works, it works really well. The moving solenoids don’t just vibrate the mouse around, the metal clacking in fact accentuates the weapon sound impacts from the game.

With this kind of tactile feedback and an omnidirectional treadmill to keep us moving, we ‘d be quite near to fooling our senses into thinking we’re really elsewhere. Which frankly, sounds rather appealing right about now.

[Thanks to Mason for the tip.